Get into an elevator and it’s a sure bet you will have an urge to flatulate.

Eat Italian (braised beef ravioli) and have a near infantile experience in McDonald’s the next morning.

On our recent trip to Chicago we went out for Thai, which is not something that’s available in the whitebread part of Michigan we call home.  I was expecting some intestinal issues the next day and made sure to scout the nearest bathrooms everywhere I went.

But damned if it wasn’t the Italian two days later that wrought its evil.  And it tasted so innocuous.  So melt in my mouth.

My toilet experience was so extraordinary that, having run away from my husband in McDonald’s, I felt the need to share on the way back to the hotel.

“I know you don’t want to know this, but that looked like legit roast beef.  Roast beef, like in strands and shit.”  Yes, this sounds very intellectual and sophisticated, but please remember I had just emerged from a breakfast-shattering elemental occurrence.

My husband tried to be polite, but as we approached the cross walk and my guts began to rumble, mere minutes after their initial explosion, I started to sweat and said, “oh my God, not again,” and he bust out with,

“Are you going to have a Bridesmaids moment here?”

That scene, where the bride sinks into the street and says, “It’s happening”, and the scene right before it where Melissa McCarthy’s character shat  [classy verb, eh?]in the sink, were my favorites of the entire movie.  I nearly peed my pants watching it.  I’m sure I’m not alone in that scatalogical confession.

God love my husband for his sense of humor, but when a person is trying to hold their sphincter together so tightly that nothing get can out, not one single drop of emulsified rejected nutrients, laughing, especially in bursts, is to be avoided.

“Shut up, shut up,” I said and then stole his line from earlier in the week, which had also made me bust a gut, but when my sphincter was safely dry and under control, “I’m approaching Defcon 4 here.” 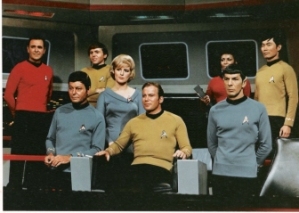 I know DefCon4 isn't from Star Trek, but it should be.

I don’t know if there’s such a thing as ass-kegels, but during the remainder of the very brisk walk to the hotel and the ride up the elevator, my husband felt the need to hold forth on their merits.

You would think I would never want to see braised beef, or any beef for that matter, again.  However, in case my inability to outrun predators left me wondering, my desire later that day for braised beef ravioli confirmed the fact that natural selection has not been allowed to weed me out, as would be most appropriate.  Sorry, kids.  At least you got some humor genes to help you laugh at the genetic failings I so lovingly passed along.

Pass the grated parmesan, please. And point me to the nearest facilities.

Stuff I Write About